Local government officials in China have been ordered to smoke nearly a quarter of a million packs of cigarettes in a move to boost the local economy during the global financial crisis.

The edict, issued by officials in Hubei province in central China, threatens to fine officials who "fail to meet their targets" or are caught smoking rival brands manufactured in neighbouring provinces.

Even local schools have been issued with a smoking quota for teachers, while one village was ordered to purchase 400 cartons of cigarettes a year for its officials. 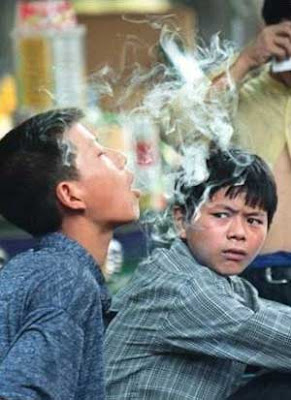 The move, which flies in the face of national anti-smoking policies set in Beijing, is aimed at boosting tax revenues and protecting local manufacturers from outside competition from China's 100 cigarette makers.

In total, officials have been ordered to puff their way through 230,000 packs of Hubei-branded cigarettes worth £400,000.

"The regulation will boost the local economy via the cigarette tax," said Chen Nianzu, a member of the Gong'an cigarette market supervision team.
Posted by arbroath at 9:38 am
Email ThisBlogThis!Share to TwitterShare to Facebook