Angry mourners have demanded the scrapping of high-tech talking tombstones where the dead can send messages from beyond the grave.

The headstones — fitted with screens and speakers — play recordings of the owners' lives when their loved ones come to pay their respects.

But spooked visitors have asked graveyard officials at Linz, Austria, to ban the gadgets. 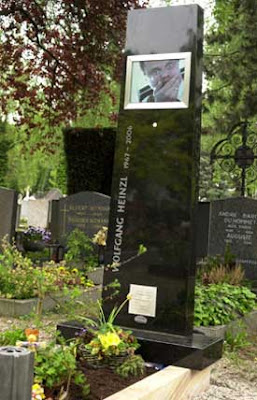 Eva Langer, 67, said: "I was kneeling beside my husband's grave saying a prayer when I heard a voice, and then laughter and music.

"When I looked round I saw a dead man's face talking to me from the tombstone next door."

Inventor Wolfgang Gollner defended the speaking stones. He said: "Talking tombstones are very popular in America already and it won't be long before they are a common site in European graveyards so people will have to get used to them."
Posted by arbroath at 10:18 am
Email ThisBlogThis!Share to TwitterShare to Facebook