Smuggler had 14 songbirds fastened to legs

A man was charged on Tuesday with smuggling songbirds into the United States by hiding more than a dozen of them in an elaborate, custom-tailored pair of leggings during a flight from Vietnam to Los Angeles.

Sony Dong, 46, was arrested at Los Angeles International Airport in March after an inspector spotted bird feathers and droppings on his socks and tail feathers peeking out from under his pants, prosecutors said.

“He had fashioned these special cloth devices to hold the birds,” said U.S. attorney spokesman Thom Mrozek. “They were secured by cloth wrappings and attached to his calves with buttons.” 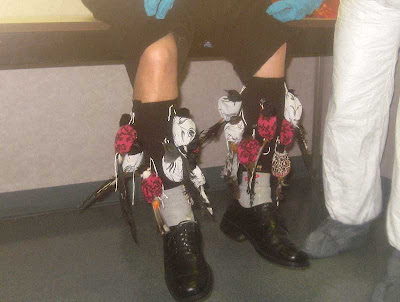 Authorities later linked Dong’s scheme to Duc Le, who was arrested after investigators searched his Orange County home and found 51 songbirds in an outdoor aviary. Both are charged with conspiracy in an eight-count federal indictment.

The songbirds sell for $10 to $30 in Vietnam and are sold to collectors in the United States for about $400, Mrozek said.

“They’re rare and there are collectors who are willing to pay top dollar for these things,” he said. e and Dong have been released on bail.
Posted by arbroath at 10:23 am
Email ThisBlogThis!Share to TwitterShare to Facebook