Three-year-old Pipi Quinlan bought a $NZ20,000 ($A15,600) Kobelco digger on auction website TradeMe, prompting immediate damage control by her mum when her purchase was revealed. Most parents are used to little ones sneaking treats into the supermarket trolley, but Pipi's deal must take the cake.

Parents Sarah and Reid Quinlan, of Stanmore Bay north of Auckland, were astonished to wake one morning to find Pipi had bought the huge excavating digger in a TradeMe auction. The technically savvy kid had woken early and, with the rest of her family sound asleep, decided to play with the computer.

With a few clicks of the mouse she entered Internet Explorer and the Trade Me site her mother had already logged on to. After a few more timely clicks, she had won the most recent auction listed on the site's homepage. It was for a Kobelco digger, and she had it for $NZ20,000 - money she didn't have in her piggy bank. 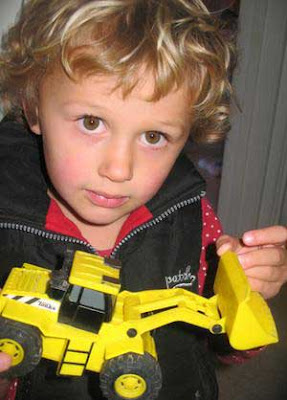 "The first I knew about it was when I came down and opened up the computer," says mum Sarah. "I saw an email from TradeMe saying I had won an auction and another email from the seller saying something like 'I think you'll love this digger'. Well, I had a few Duplo Lego play kits on my watch-list, so just assumed I'd won a digger toy-set," she says.

"It wasn't until I went back and re-read the emails that I saw $NZ20,000, and got the shock of my life," says Sarah. "I called my husband Reid over to make sure I wasn't seeing things. I asked him what a Kobelco was and he said 'I think it's an earthmoving digger'."

TradeMe has reimbursed the seller's costs for listing the digger and the auction. While the seller wasn't impressed with Pipi's antics, he relisted the digger again for another auction.
Posted by arbroath at 10:22 am
Email ThisBlogThis!Share to TwitterShare to Facebook