Toddler in the forest rescued after two days alone

Toddler Joshua Childers has been rescued unharmed after spending two days barely clothed and alone in a forest wilderness that is home to bears and mountain lions. The three-year-old was thirsty, wet, covered in ticks and ready to go home when a volunteer searcher spotted him lying in a hollow in the Mark Twain National Forest in south-eastern Missouri on Wednesday.

He had wandered away from his parents' mobile home near Arcadia on the edge of the park at around 11.30am on Monday while his father was asleep and his mother was on the phone. Hundreds of local people joined a search involving planes, divers, dogs and even donkeys to scour the wild, rugged terrain.

Searchers were starting to lose hope of ever finding him when Donnie Halpin, a local construction worker, noticed two dogs sniffing at something as he walked along an all-terrain vehicle trail about three miles from the boy's home. He spotted the child's bare bottom as he lay on the ground. 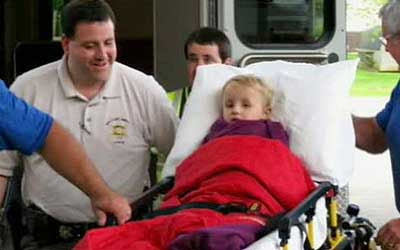 Joshua was wearing only a T-shirt, a pull-up nappy and trainers when he disappeared and but only had the shirt and a single shoe left when Mr Halpin found him. Unsure if he was alive, Mr Halpin called out: "Hey, bud!" and the boy turned to look at him. "He jumped right up and grinned at me. I said, 'You ready to go home? He said, 'Yeah'," said Mr Halpin.

Mr Halpin rang the emergency services, then wrapped the child in his shirt and carried him about half a mile to a house. "He hung on to me pretty tight. Outside of a few scratches, he was in really good shape," said the boy's rescuer.

"I don't know how he did it. I don't know grown men that could do it. But all I can say is he's a tough little bugger," said Adam Childers, Joshua's father. The boy is being treated in hospital where he was slightly dehydrated but otherwise fine, said Mr Childers.

There's a news video here.
Posted by arbroath at 10:27 am
Email ThisBlogThis!Share to TwitterShare to Facebook