Like most twins, 11-month-old Justin and Jordan have a lot in common. But it’s what they do not have in common that has a lot of people, including their parents, calling them a miracle of science. “I have twins, but they’re by different fathers,” said Mia Washington.

Washington admits she had an affair that resulted in two babies, born at the same time, fathered by two different men. “Out of all people in America and of all people in the world, it had to happen to me. I’m very shocked,” Washington said.

The parents went to Dallas DNA Lab Clear Diagnostics after noticing the twins have different facial features. According to the paternity test, there’s a 99.999 percent chance Justin and Jordan do not have the same father, and zero percent chance they do. The lab has never seen this type of result, nor do they expect to see it again. 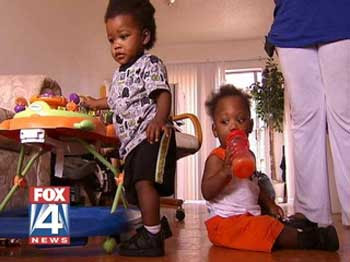 “It is very crazy. Most people don’t believe it can happen, but it can,” said Clear Diagnostics President Genny Thibodeaux. When twins have two fathers, doctors call it heteropaternal superfecundation. It’s so rare; there are only a handful of documented cases in the world.

“This is likely to be the only time that we will ever see this occur in the city of Dallas; it’s that rare,” said Dr. Chris Dreiling, who has not met the family. Dreiling said the medical marvel can happen when a woman releases multiple eggs during ovulation. If she has more than one sexual partner within the same time period, sperm cells can fertilize two separate eggs.

The twins’ father said he’s forgiven his fiancé's infidelity and has vowed to stay with her and raise both boys as his own. Washington said she plans to tell the boys about their DNA differences when they’re old enough to understand. As for the other father, she has no plans to tell him.

With news video.
Posted by arbroath at 10:27 am
Email ThisBlogThis!Share to TwitterShare to Facebook