Indian prostitutes turn to karate to help keep them safe

Prostitutes in the southern Indian state of Tamil Nadu have begun taking karate lessons to protect themselves from violent customers and pimps.

The women say they were so fed up with abuse that they approached a local community group for help.

The organisers hope the course in the ancient self-defence technique sends a message that violence against sex workers must stop. 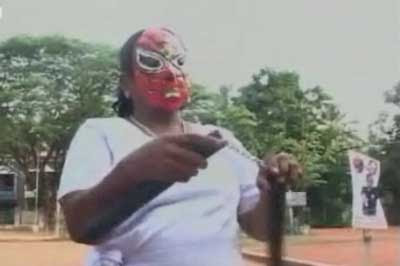 India is thought to have nearly three million sex workers. Most live on the fringes of society and have few legal rights. That means they often have little or no choice but to put up with violence and harassment.

Dressed in white and wearing masks, the first 75 women to take the karate course in the coastal city of Madras (Chennai) had to brave intense heat as they practised their moves.

They trained together for nearly five hours a day, mostly learning how to fight. Now the women say they feel more able to protect themselves.

Full story with video here.
Posted by arbroath at 10:16 am
Email ThisBlogThis!Share to TwitterShare to Facebook