The reptiles were discovered in an orchard near Amersham, Bucks, after a member of the public saw them being mauled on June 4.

The two – named Humpty and Dumpty by RSPCA officers – have been wrapped in a special pink plaster cast and dressings which need to be changed every three days while their shells grow back.

They are expected to make a full recovery, although vets at Amey Zoo, near Hemel Hempstead, Hertfordshire, have said their shells are likely to appear slightly deformed. 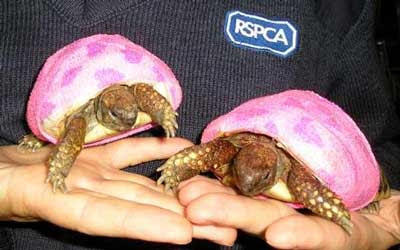 Veterinary staff also battled to save two other tortoises whose shells were fractured by the dog, but one died soon after being found and the other had to be put down.

RSPCA animal collection officer Kate Cornell has launched an investigation into the incident. She is caring for the two survivors in her home while the RSPCA tries to track down the owners.

"These tortoises suffered a great deal of pain and trauma. We need to find out what happened to them and also if they have an owner out there who is missing them," said Miss Cornell, "At the moment we don't know if the tortoises were abandoned or had just escaped so any information would be very useful."
Posted by arbroath at 9:25 am
Email ThisBlogThis!Share to TwitterShare to Facebook