A litter of kittens may have already used up several of their nine lives after being born in a combine harvester – and being nursed there for six weeks. The kittens, who were hidden in the combine unbeknown to the farmer until earlier this week, incredibly even survived a pre-harvest test run of the combine.

Farmer’s wife Shane Dew, who runs High Beaumont Hill Farm, near Darlington, with her husband, David Hall, had been looking for the kittens for six weeks after she realised one of the farm’s cats, Smokey, had given birth.

“I knew she was pregnant because she had got fat and one day she came back and I could see she had given birth,” said Ms Dew. “I went to look for them so they could be socialised, but I couldn’t find them anywhere. She kept coming out for food and disappearing again. I have been looking for them for six weeks. 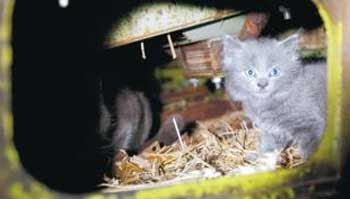 “On Monday, one of the farm hands knocked on the door and said, ‘I think I’ve found your kittens.’ He had taken the front of the combine harvester off to get it ready for harvest and seen one of them peeping out.”

It is believed there are three kittens – two grey and one black. The farm workers are hoping to lure the kittens out of their harvester haven using food but, if they do not appear, the combine will have to be taken apart. The kittens, who are probably now feral, will then be socialised by Ms Dew and rehomed.
Posted by arbroath at 9:45 am
Email ThisBlogThis!Share to TwitterShare to Facebook