Drug lord Pablo Escobar's hippo died the same way he did, hunted down and shot by the authorities for posing a danger to the public. The hippopotamus that escaped three years ago from a ranch once owned by Escobar was killed on orders of the government.

Cocaine king Escobar, who was gunned down by police on a Medellin rooftop in 1993, was so flush with cash that he flew in hundreds of exotic animals, including kangaroos, flamingos, elephants, rhinos and nine hippos.

Many were given away to zoos after his death and collapse of his drug empire. But two dozen hippos continued to live and mate on his former estate in northern Colombia. 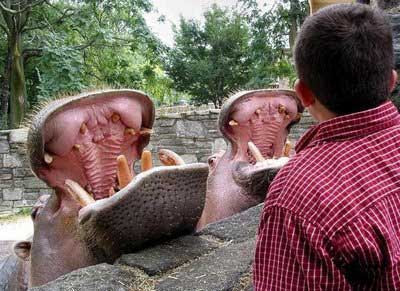 A male and a female escaped in 2006, freely roamed the wetlands near the Magdalena River and even reproduced in the wild. They were rarely seen and became something of a local legend until two journalists found them grazing 100 kilometers (65 miles) away from the ranch last month. Colombia's environmental agency ordered the animals killed, saying they were carriers of disease and posed a risk to local communities.

Colombians were shocked by television images broadcast on Friday of the carcass of the male hippopotamus surrounded by hunters and soldiers. Animal rights groups denounced the killing. "They could have been captured and kept in a safe place until a permanent refuge was found for them," said Marcela Ramirez of a local group called Animal Protection Network.

The hunt was still on for the surviving adult hippo.

There's a news video here.
Posted by arbroath at 10:33 am
Email ThisBlogThis!Share to TwitterShare to Facebook