Smoking not for minors

A Mynah bird in China has taken up smoking after constantly pestering his owner to give him a cigarette. Zhang Li, from Xuzhou in eastern China, said: "As soon as he sees me in the morning the first thing he says is that he wants a cigarette. And he doesn't stop pestering me until I give him one."

He said the bird called Xi Zi used to be quite happy with half a cigarette a day but now he likes to have a least three at different times of the day or becomes unbearable. He said: "Whenever I light one up myself he just watches me the whole time - he is a complete addict now."

Li believes the Mynah bird famed for its ability to impersonate humans learned to ask for a cigarette after seeing him ask his wife if he could have one of her cigarettes. 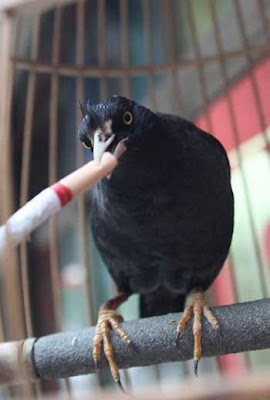 He said: "He is very talented, he can recite poetry and can sing but he refuses to do any of that until he's had a cigarette in the morning. Then he sits there happily chatting away and performing to anybody that comes to visit."

And he added: "I tried to help him quit smoking, but failed because he refuses to speak or eat unless I give him cigarettes."

Animal groups however criticised the man for allowing the bird to smoke. Local vet Shing Ma said: "It's absolutely harmful to the bird."
Posted by arbroath at 10:30 am
Email ThisBlogThis!Share to TwitterShare to Facebook