When four-year-old Zachary Clouter was asked to help out on his parents allotment, he didn't expect to find a spectacular spud.

The thrilled youngster dug up a potato the same size and shape as the rubber ducks which normally play in his bath.

Zachary is so pleased with his discovery that he has banned his family from eating the potato duck. 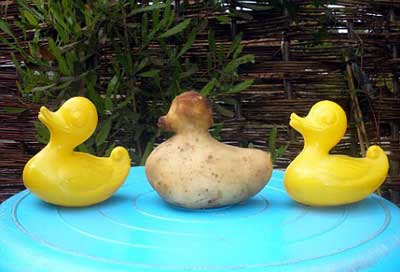 His mother, Catherine, said he was not at all concerned that it has an odd brown colour or earthy smell, and has been rushing around to show everyone he knows at home in Ipswich, Suffolk.

'He was thrilled when he found it and rushed around showing people,' she said. 'We've been keeping in the fridge to preserve it.

'He thinks we should plant it back in the ground and see if more ducks grow next year.'
Posted by arbroath at 9:24 am
Email ThisBlogThis!Share to TwitterShare to Facebook