A wife took revenge on her husband after she discovered he was having an affair by making him stand in public with a sign saying 'I cheated'.

William Taylor stood shame-faced on a busy road with the large homemade sign draped round his neck saying: 'I cheated. This is my punishment.'

Taylor said his wife had come up with the humiliating punishment after she found out he had cheated on her. The wife, who has not been named, found evidence of his affair on his mobile phone. 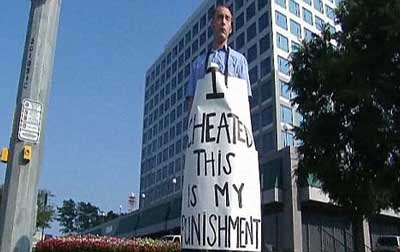 Taylor, of Centreville, Virginia, said his wife had wanted him to stand with the sign for a week. But after a couple of hours he received a call to say his punishment was over.

He told a local TV station in Virginia that he thought his wife was joking when she suggested the idea. 'I thought she was kidding, but she was serious,' he said. 'I figured I got to do what I got to do to makes things right. So here I am.'

Dozens of drivers honked their car horns as they saw Taylor standing forlornly on the busy junction during the morning rush hour.

There's a news video here.
Posted by arbroath at 10:11 am
Email ThisBlogThis!Share to TwitterShare to Facebook