A pair of rabid rabbits has been caught killing a series of snakes near Cairns. For three weeks Armando Del Manso believed his dog was responsible for the dead snakes showing up with teeth marks all over them on his East Barron property’s lawn each morning.

But it turns out it was a pair of rampaging rabbits killing the snakes. The 42-year-old boilermaker first made the discovery Tuesday night when he spotted the two wild rabbits attacking a king brown snake. 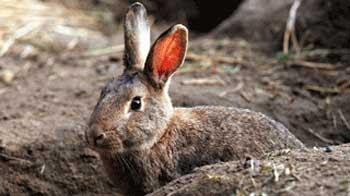 “The snake was raised up in the air in the striking position and the two rabbits worked their way around him and killed him in two minutes,” Mr Del Manso said. “I’m gobsmacked, it’s absolutely incredible.

“We were watching from the veranda with a spotlight, and I thought, who is going to believe this, they’ll think I’m crazy.” 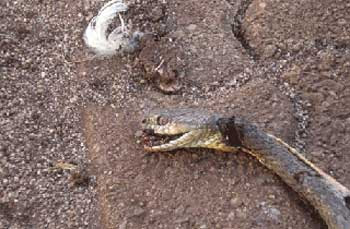 He said the rabbits lived under a pile of wood in the backyard and were around the same size as a household cat. “These are killer rabbits man,” he said.

“I’ve never ever seen or heard anything like this happening, it could be a breakthrough.”
Posted by arbroath at 10:33 am
Email ThisBlogThis!Share to TwitterShare to Facebook