When stubborn Qu Liming refused to make way for a government building project, he had no idea just how far officials would go to turn a molehill into a mountain.

Planners wanted Qu to quit his cliffside home to make way for a new village in Liulin, northern China, but were furious when he tried to block their diggers with his car.

"I thought that would slow them down so we could talk, but it just made them mad," said Qu. 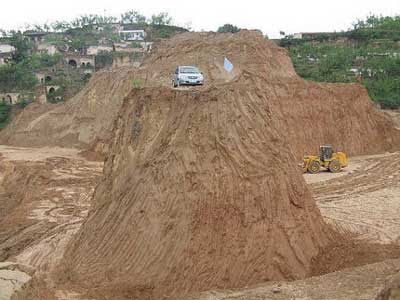 "They began to dig out all the earth around my car and my home so now it sits on a mountain all of its own I think as a warning to others," he added.

Now the silver Chrysler sits on top of its own mini-mountain nearly 60ft up in the air amid the £500,000 construction site.

"I tried to climb up and fell all the way down - but the police said it was all my fault for being big-headed," wailed Qu.
Posted by arbroath at 9:28 am
Email ThisBlogThis!Share to TwitterShare to Facebook