Surgeons at Boston's Angell Animal Medical Center removed a 21-pound tumor from a Labrador retriever, the largest tumour veterinarians there had ever seen.

Warren, 13, fully recovered from the surgery last spring to remove the tumour that had grown to one-sixth his body weight.

"Warren had the largest external tumor that I have personally seen in my 35 years as a veterinary surgeon,” said Dr. Michael Pavletic, Director of Surgical Services. 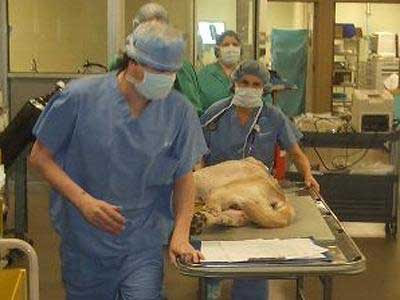 The tumour had grown so large it made walking difficult for the dog and his breathing became increasingly laboured.

Surgeons faced the problem of dealing with the cavity that was created once the mass was removed.

"Although Warren’s tumour has the possibility of recurring, it appears to be a slow-growing tumour that we can monitor and help manage in the months ahead,” said Dr. Jean Duddy of Angell’s Internal Medicine Service.

If you wish to see what a 21-pound tumour looks like, here's your chance.
Posted by arbroath at 10:26 am
Email ThisBlogThis!Share to TwitterShare to Facebook