US tourist hitches rickshaw then weds driver in a week

A 26-year-old American tourist travelling in India hitched a ride in a rickshaw last week and married the driver a few days later.

Whitney from Chicago met her prince charming in Jaipur in Rajasthan, a state west of the capital famous for its stately palaces, after hailing a motorised rickshaw and hiring the driver for her stay in the city.

"On the third day, he surprised me by popping the question," Whitney said. "'I want to spend the rest of my life with you', he told me. I fell in love." 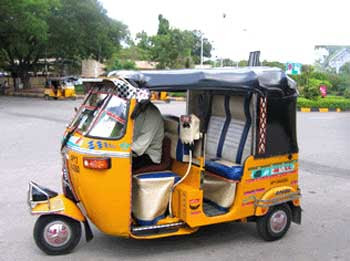 After meeting last Saturday they were married on Wednesday in a simple ceremony. Whitney was pictured standing with new husband Harish Hotala, wearing a traditional sari that covered her head.

Hotala is "a cabbie with a difference," however. "Though a school dropout, he is fluent in English and owns three autorickshaws."

Whitney, whose surname wasn't given, is to fly back to the US on September 30 to face her parents. "My father was surprised but my mother took it sportingly," she said.
Posted by arbroath at 9:48 am
Email ThisBlogThis!Share to TwitterShare to Facebook