The world's smallest working model train set has been unveiled – measuring just 1/8th of an inch by 1/4 of an inch.

At 1-35200 scale to the real thing, the five-carriage train travels around an oval route including a ride through a tunnel. 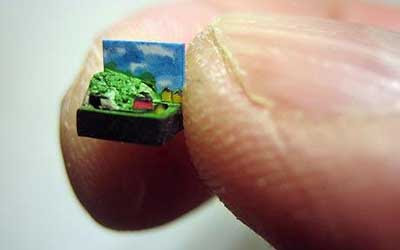 Created by New Jersey model train enthusiast David Smith, the model was built using nothing more fancy than a craft knife and a steady hand.

Mr Smith, 55, from Toms River, said: "This model train set is going to be part of the larger train set I have at home.

"I am creating a fictitious village called James River Branch and this model train is going to be placed inside the model shop I am building as part of the re-creation. It is going to be a model train village inside a model, so it is very postmodern"

Powered by a standard two-inch-long rotating motor head and carved out of mouldable plastic, the model train cost Mr Smith just over £6 to make.

There's more information here.
Posted by arbroath at 9:44 am
Email ThisBlogThis!Share to TwitterShare to Facebook