In the comfort and security of their car, a family thought there was nothing to worry about as they drove through a South African safari park - until a lion calmly opened their back door with its teeth.

The lion may have appeared wild, but it had clearly learnt one or two things about cars after years of watching curious visitors drive past. 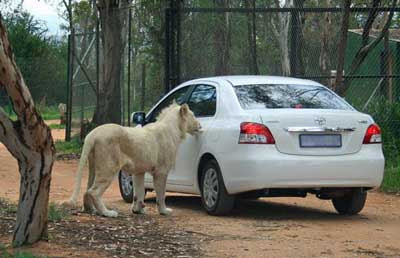 As the white Toyota came to a halt in the Lion Safari Park in Johannesburg, it slowly padded over while the family inside watched in excitement, unaware of what was about to happen.

Thier glee turned to horror as the 300lb lion firmly took the rear door handle with its teeth and pulled it open in one deft movement. For several seconds the car remained still while the occupants digested the shock of what had happened before finally hitting the accelerator and driving off. 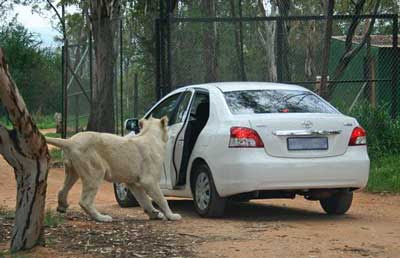 As they fled, the lion followed in pursuit until it reached the gates of the enclosure. There it was finally held back by a warden who hurled stones to shoo it back.

Richard Holden, a British tourist, was behind the family in the Toyota and managed to capture the action on his camera.
Posted by arbroath at 10:18 am
Email ThisBlogThis!Share to TwitterShare to Facebook