Jonesborough resident Jim Stevens admits he’s not a particularly religious person, but even he is awed by what he has seen nearly every morning for the last couple of weeks on the driver’s side window of his Isuzu pickup truck.

It was two weeks ago today that an image, resembling the face of Jesus, made its first appearance on the window. Stevens, who said he has a “bum shoulder,” was having friends from Rogersville help move some items. He entered his truck from the passenger’s side to put his drink inside the vehicle. He said when he went around the truck to the driver’s side, the image was there. Initially, Stevens said he figured the image would go away and that would be the end of it.

But since it first showed up, a morning dew has led to the appearance of the image. Later in the day, when the dew from the morning evaporates, Stevens said the image goes with it. However, when the dew returns the next morning so does the image on the window. Even rolling the window up and down has not stopped it from reappearing. 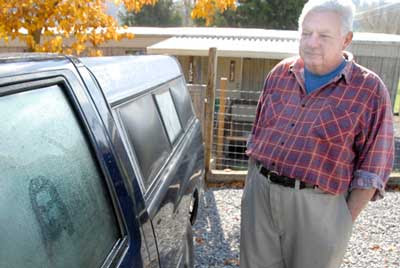 Stevens said no matter who sees the image, the reaction is the same, as a recent trip to the grocery store proved. He said a woman at the store had seen the image prior to him entering. By the time Stevens had bought a few small items, a number of the store’s employees and patrons had been out to catch of glimpse his window.

“There was no doubt when they came out they saw what they saw,” he said.

Stevens said he has not done anything to or had anything in the truck to explain the sudden appearance of the image. However, he’s not ready to see it go. “Of course, I’m not going to wash it,” he said of the window.
Posted by arbroath at 10:30 am
Email ThisBlogThis!Share to TwitterShare to Facebook