For the past 10 years, Jesus Leonardo has been cleaning up at an OTB parlor in Midtown Manhattan, cashing in, by his own count, nearly half a million dollars’ worth of winning tickets from wagers on thoroughbred races across the country. Discouraged bettors usually toss their tickets as soon as the race they have wagered on has ended, which may be a bit premature.

During his glorious run, Mr. Leonardo, 57, has not placed a single bet. “It is literally found money,” he said on a recent night from his private winner’s circle. He spends more than 10 hours a day there, feeding thousands of discarded betting slips through a ticket scanner in a never-ending search for someone else’s lost treasure. “This has become my job, my life,” he said. “This is how I feed my family.”

Leonardo, who favours track suits and wears his graying hair and bushy beard in long ponytails, is what’s known in horse racing parlance as a stooper — a person who hangs around racetracks and betting parlors picking up tickets thrown away by others. Most tickets are losers, but enough are winners to make it worth his while. 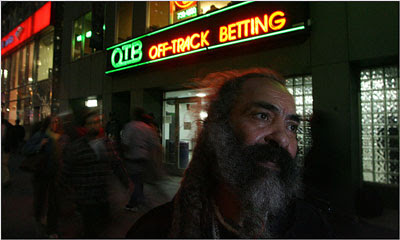 To his stable of OTB buddies, Mr. Leonardo is the Secretariat of stoopers. “He’s a legend,” said Paul Pepad, 57, an out-of-work musician who lives in Manhattan. “Everyone knows that this is his turf, that all the tickets thrown out belong to him, period. It’s just been that way as long as I can remember.”

Mr. Leonardo, who is married with two teenagers, is hardly living on the fringes. He said that stooping brings him $100 to $300 a day, and more than $45,000 a year. Last month, he cashed in a winning ticket from bets made on races at Santa Anita Park in Arcadia, Calif., for $8,040. His largest purse came in 2006, when he received $9,500 from a Pick 4 wager (choosing the winners of four consecutive races) at Retama Park Race Track in Selma, Tex.

It is all taxable income. “I file my winnings with the I.R.S. every year,” Mr. Leonardo said in his thick Dominican accent.
Posted by arbroath at 9:39 am
Email ThisBlogThis!Share to TwitterShare to Facebook