Owners pay to be buried with their pets

From Egyptian pharaohs to Anglo-Saxon warriors, humans have been buried alongside their most sacred or treasured animals. Now the practice is making a comeback with an increasing number of pet owners seeking burials with their favourite cats, dogs and horses.

Planners in Lincolnshire last week approved the latest in a series of joint animal and human cemeteries where masters can be interred close to their beloved companions rather than being cremated. A handful of joint cemeteries even allow pets and owners to be buried in the same plot.

The trend has been accelerated by the growth in non-denominational 'natural' sites for humans that use biodegradable coffins and often have woodland settings without rigid lines of plots or fixed headstones; such layouts make it easier to add pets. Penny Lally, who runs a pet crematorium, cemetery and 'woodland burial place' in Penwith, west Cornwall, has laid to rest more than 30 owners alongside their animals since she began allowing joint graves in 2003 and has more than 120 forward bookings. 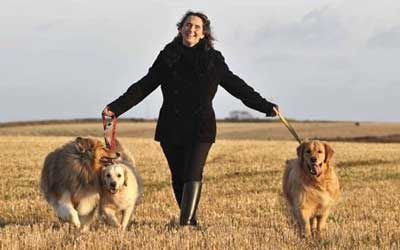 Among her best customers is animal lover Carole Mundy, 54, who has reserved a plot for herself and her husband Robert right next to their 17-year-old golden retriever, Dylan, who was buried there in February 2008. She has also pre-booked a nearby space for Merlin, her Irish thoroughbred.

"As well as being the best dog in the world, Dylan was a fantastic friend and I don't see why he shouldn't have the same resting place as me," she explained. "Nothing makes me more angry than people saying 'it is only a dog'. Animals give you unconditional love, they don't reprimand or judge you." Her other dogs Sir Lancelot, Queen Guinevere and Sir Galahad are also expected to find themselves in the same cemetery.

"All the burials will take place in a wicker casket. I never wanted to be cremated and when you look at the cost of a conventional funeral it isn't a great deal different," she added. "Some think you're screwy but they need to realise what a difference animals can make to people's lives."
Posted by arbroath at 9:03 am
Email ThisBlogThis!Share to TwitterShare to Facebook