Lawsuit after armrest bonks cellphone user on head during movie

This is a cautionary tale about the perils of answering a cellphone in a theatre as the movie's rolling. Taj Showers, settling in for a matinee with her 10-year-old son, did just that as The Incredible Hulk was doing his thing on the big screen. She clicked her vibrating phone and hunched forward to "discreetly" hold her conversation, according to a lawsuit filed Wednesday in Cook County Circuit Court. But it was as she was leaning forward, her head tilted to the side that an upright armrest fell in to position - bonking her so hard, she says, that she went to the hospital with a concussion.

"It hit me so hard I fell out," Showers said, noting that her young son was the first to notice that she had a knot on her head and insisted the two leave the theatre. She was then taken by ambulance to Advocate Lutheran General Hospital in Park Ridge. On Wednesday she said she still suffers from blurred vision and headaches and had to drop out of school in the wake of the June 2008 incident at the Kerasotes Niles ShowPlace 12 cinemas. 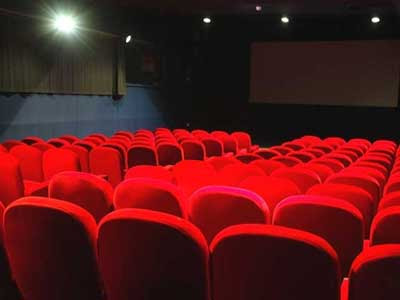 In her negligence lawsuit, filed on Wednesday in Cook County Circuit Court, Showers maintains that armrest - originally in the upright position - fell in to the horizontal position because it was poor maintenance. "Who knew? You go to the movie theatres and the arm rest is going to knock you out. It's an unforeseen incident and you don't want anybody to go through the pain and suffering I'm going through," Showers, 36 of southwest suburban Summit, said. She is seeking unspecified damages.

Asked whether she's now rethinking answering that phone call - because it's annoying to other moviegoers - she said she was simply making plans for the evening. "I bent down so as not to disturb anybody."

You can read the full thirteen-page lawsuit here.
Posted by arbroath at 7:09 am
Email ThisBlogThis!Share to TwitterShare to Facebook

I'd rather hoped this was going to be a tale of someone incredible-hulk style ripping off an arm rest and beating the inconsiderate cow over the head with it.

How far over was she hunched?  I can't wrap my head around the physics of this one.  If the armrest hit her head, wouldn't she had to have had her head resting on (or near) the seat?

You can't see the movie if you do that...

If she had a bump on her forehead, she would have had to be in a really weird position to have the armrest hit her there.  Besides, the theater should be counter-suing her for disturbing others by talking on her phone.

Agreed Ratz. Very much so.