Mother forced her children to eat Tabasco as form of punishment

An Australian mother who forced her children to eat Tabasco sauce as a form of punishment and brainwashed them not to call her former husband ''Dad'' has been ordered by a court to undergo psychological treatment after a judge found her actions had been ''entirely inappropriate''.

The woman, known as Ms Israel, had made an application to the Family Court in Sydney seeking her five-year-old son, known as ''M'', be returned to her after he was removed from her care last December.

She and the child's father, known as Mr Hilder, had separated in 2006 when both shared custody of him. 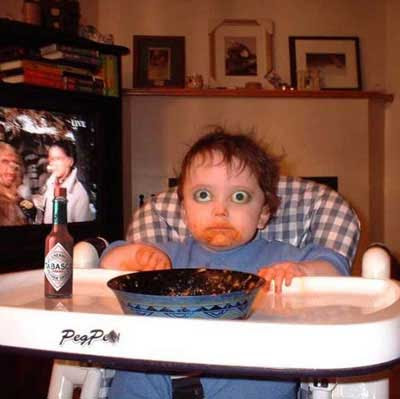 Judge Graham Bell said it was ''clear'' the mother had administered the hot sauce to her children as a form of punishment and that ''M'' had been subjected to it from the age of three.

Another of Ms Israel's sons said he found it funny because his stepbrother ''pees his pants and looks very scared'' when threatened with the punishment.

The judge ordered that the child live with his father and that the mother not be allowed to have unsupervised visits with her son until she had undergone appropriate psychological treatment.
Posted by arbroath at 7:11 am
Email ThisBlogThis!Share to TwitterShare to Facebook