A flock of swans and geese were back in the water on Monday in the Canadian city of Stratford, Ontario, after police bagpipers and drummers led them in a parade. Each Easter Sunday, the city holds the Swan Parade to lead the waterfowl from their winter fenced enclosure back to the Avon River. This year, the parade route was five-deep in spectators. 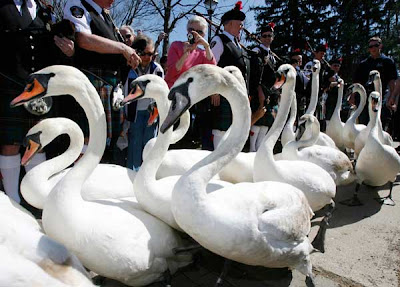 The kilt-wearing Stratford Police Services pipe band played and marched the birds to the riverbank in balmy weather as volunteer wranglers kept the 28 swans and two Chinese geese on the route.

Spectators tossed corn and grain to the birds, which included three already-mated pairs. The swans are territorial and will establish their spaces on the river before mating.
Posted by arbroath at 7:16 am
Email ThisBlogThis!Share to TwitterShare to Facebook