The pursuit of a sweet treat got four-month-old little Yorkshire terrier puppy Marley, who lives with the Preston family in Queensway, Warminster, into a tight spot after he wedged his head in a sofa and had to be freed by firefighters.

Mum Mandie, 39, said it was Marley’s sweet tooth that led to him getting stuck in the family’s reclinable sofa on April 2. “I found some jelly beans under the sofa afterwards, so he was probably going under there for one of them,” Miss Preston said. “He used to go around there all the time but this time he didn’t come back and I heard a yelp. I put up the recliner and I could see his head was stuck and he couldn’t get out.

“I went next door to borrow a saw, but I could see that it wouldn’t have cut through the metal. I even tried to put baby oil on him as a lubricant but that didn’t work either. He was losing consciousness and he was in a state of shock. He was having a job to breathe. In the end I had to phone the fire brigade because I just couldn’t get him out.” 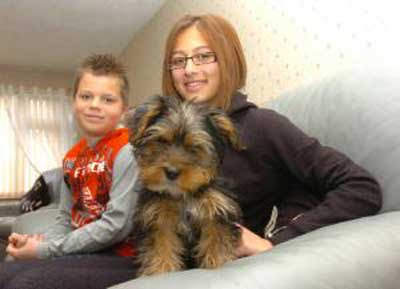 One crew from Warminster were called to the scene and were able to release the dog within half an hour. “I was expecting him to come out with a broken neck. I didn’t expect him to survive,” Miss Preston said.

Crew manager Rob Burt of Warminster Fire Brigade, said: “To be stuck in a sofa is a bit strange but pets get stuck in all sorts. “I thought ‘bless him, let’s get him out’.

“We adjusted the settee and had some wedges underneath to raise it slightly and then we closed the recliner which opened up a gap to release the dog.” Marley suffered no injuries and did not have to be taken to the vets.
Posted by arbroath at 8:00 am
Email ThisBlogThis!Share to TwitterShare to Facebook