Far more people in India have access to a mobile phone than to a toilet, according to a UN study on sanitation.

India's mobile subscribers totalled 563.73 million at the last count, enough to serve nearly half of the country's 1.2 billion population. 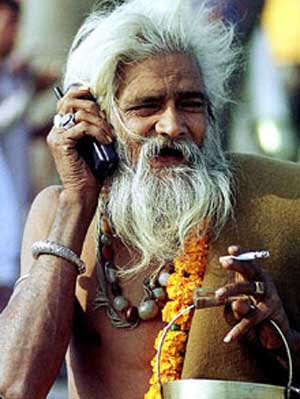 But just 366 million people - around a third of the population - had access to proper sanitation in 2008, said the study published by the United Nations University, a UN think-tank.

"It is a tragic irony to think in India, a country now wealthy enough that roughly half of the people own phones," so many people "cannot afford the basic necessity and dignity of a toilet," said Zafar Adeel, the UN University director.
Posted by arbroath at 8:09 am
Email ThisBlogThis!Share to TwitterShare to Facebook

<span>That's bulls**t...i live in a wealthy country, a family house, with 2 toilets and 4 mobiles for 4 people...so what's the problem...</span><span>...they only have 2 mobiles, they only have a toilet...continue being poor in proportion
</span>

It's impossible one toilet for one ass, in the first world like the 3rd world ... and the second world too.

Yeah, the phrasing "more mobile phones than toilets" is silly and does not indicate a problem, since one doesn't need to have one's very own private toilet. On the other hand, if it's phrased as the article explains, "more people have mobile phones than have access to toilets," it's a bit more concerning.

They're talking about access to toilets here... not the number of toilets.

I'm glad it's just access.  I was feeling kind of bad for living alone and having three toilets, two showers and a bathtub.  Only one mobile phone, though.