A lifeboat crewman orchestrated a dramatic sea rescue 4,000 miles away in the Caribbean from a DIY store in Britain. When Alex Evans answered his mobile phone he was stunned to hear best friend Mark Corbett, 25, shouting: “Alex I’m in the s*** and I need your help.”

The RNLI volunteer, 27, from Aberystwyth, west Wales, was even more perturbed when he learned his friend claimed he was in a fast sinking ship called the Titanic. The unlikely call came just one day before April 1 as he queued with his mum to pay at a DIY store in his home town.

After ensuring he was not the butt of an elaborate practical joke, Mr Evans coordinated a dramatic sea rescue from the store’s kitchen section. He rapidly took down the grid reference of the 1,700 ton ship’s location on a till receipt and alerted Milford Haven coastguard. 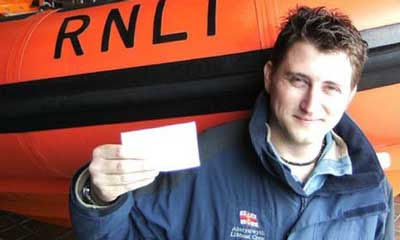 “He called me because it was the only number that he could remember in his panic. I think it was either me or his mum,” Mr Evans said. “I think his mum might not have had as much luck if she rang up the coastguard and said ’my son is in a sinking ship in the Caribbean called the Titanic’.”

His call proved to be a life-saver as the emergency alert was transferred to Falmouth Coastguard, which deals with international incidents. Within an hour the American coastguard and a French spotter plane were scrambled and a US coastguard cutter eventually towed the ship to safety.

Mr Evans said he had since heard that his friend had safely got back to dry land and was expected back in the UK this week.

There's a news video on this page.
Posted by arbroath at 7:05 am
Email ThisBlogThis!Share to TwitterShare to Facebook