He has spent nine weeks in Australia but the one experience Michael Zinke expects to be asked about on his return to Germany is the time he was saved by five ninjas on the backstreets of western Sydney.

Bruised, battered and still a bit shaken, the medical student yesterday said he was trying to make sense of the events that played out in an dark alley in Kingswood on Tuesday night.

''There was the policemen and there was the ninjas,'' he said. ''It was not something that I would expect in Kingswood.'' 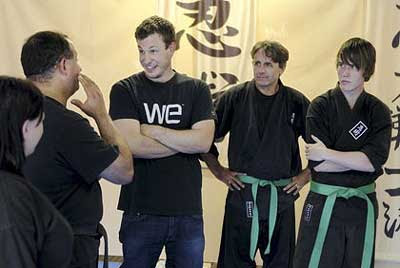 The 27-year-old was walking home from the local railway station when three men who had been harassing him on the train knocked him to the ground and stole his mobile phone and iPod. They then started kicking him. The attack stopped abruptly when five ninjas, training at the dojo across the road, became aware of what was happening and ran out to help.

''I was on the ground and these guys were kicking me, then I just saw them running,'' Mr Zinke said. ''I was thinking, 'Why have they stopped kicking at me?' Then I turned around and I saw the ninjas. Who knows what would have happened if they were not there.''

Mr Zinke yesterday stopped by the dojo to thank the men who had come to his aid. In return the ninjas passed on a few basic moves for the medical student to take home. Police also praised the intervention of the ninjas, who might have prevented a more serious attack.
Posted by arbroath at 8:06 am
Email ThisBlogThis!Share to TwitterShare to Facebook

Ninjas?  I thought that was a historical term.  Wouldn't these just be karate students or something?