A couple who took in a squirrel have been warned they face prosecution unless they allow him to be put down. Patricia Faulkner and Dave Armitage built a run in their Colchester back garden for the squirrel they have named Squeaky. Although he cannot climb trees, he is able to run about.

Squeaky has been with them for about seven years, but they are moving to a smaller home in Norfolk and had to call in the RSPCA as they will not have room for him. The animal charity told the pair they had broken the law by keeping a wild animal without a licence and said Squeaky would have to be put down. If they defy officials, they could face prosecution.

Ms Faulkner, 50, who works as a medic on film sets, said: “I can’t believe they would want to get rid of him. It’s like they are the Royal Society for the Protection of Cruelty to Animals, except squirrels. 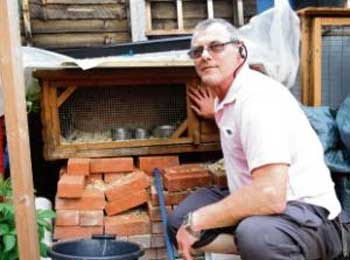 “He can’t climb, but he’s fat and healthy and he’s not like a pet. I’ve tried to keep him wild and he would take your finger off if you went near him. I wish I hadn’t got the RSPCA involved now, because there is just no good reason to put him down.”

RSPCA spokeswoman Katy Geary confirmed the couple had unwittingly broken the law by keeping a grey squirrel, as a licence was required under restrictions laid down by Natural England. She said it would also be illegal to release Squeaky, in the knowledge that he was not fit to survive in the wild.

That means the RSPCA’s only option, other than to put him down, is to find a sanctuary which does have a licence to keep squirrels. The restrictions are tougher than for many other species as moving grey squirrels into certain areas of the country could put native red squirrels under threat.
Posted by arbroath at 8:00 am
Email ThisBlogThis!Share to TwitterShare to Facebook

"The restrictions are tougher than for many other species as moving grey squirrels into certain areas of the country could put native red squirrels under threat."

And those certain areas would be... the Isle of Wight. Anywhere else? Doesn't seem to be a big problem.

The way the RSPCA behave is ridiculous, seems they always want to kill before protection.
The rules they impose when trying to adopt an abandoned animal mean , many suitable people are turned away and the animal destroyed.
Bit of a personal rant im afraid

Now there's an original one:
If the problem is to complicated, if the solution is to difficult- Just eliminate the problem- Kill the animal.

People are a bit hypocritical when it comes to animals.  Apparently, the only lives that have any value are our own.