A Miami International Airport federal security screener has been arrested for allegedly using an expandable police baton to beat up a co-worker.mThe source of their conflict, police say: daily ribbing about the size of the screener's genitalia. 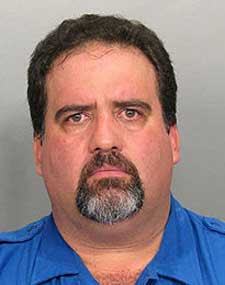 Months of joking culminated on Tuesday night, when Negrin attacked co-worker Hugo Osorno in an employee parking lot, according to an arrest report. Negrin ``stated he could not take the jokes any more and lost his mind,'' said the report, made public on Thursday.

The agitated screener forced Osorno to his knees and made him apologize before whacking him on the back and arms with the baton, according to the report. Negrin, who posted $7,500 bond on Wednesday night, is charged with aggravated battery.
Posted by arbroath at 8:10 am
Email ThisBlogThis!Share to TwitterShare to Facebook

I can't say I feel a lot of sympathy for the victim. Hopefully he has learned his lesson about teasing other people. Now it's time for the teased man to learn his.

By the way, I thought people were assured the full body scanners couldn't show details like that.

when the technology was first announced there was plans to add a program to blue out sensitive areas but it seemed to never make it to final production.

The technology is available, bt it's up the the buyers of those machines to implement it.

Okay, I also think that that teaser got what he deserved.
But perhaps the teased guy should also think about seeking some psychological help on his sensitiveness on the mentioning of certain issues...

Maybe they don't black out the sensitive areas because people could hide stuff there.

In any case, I don't think we should be surprised that something like this has happened.  If we have the technology to look at each other's genitals, we need to use it responsibly (and a lot of people are too immature to do so).