For almost 50 years, Don Ritchie has lived across the street from Australia's most notorious suicide spot, a rocky cliff at the entrance to Sydney Harbour called The Gap. And in that time, the man widely regarded as a guardian angel has shepherded countless people away from the edge.

What some consider grim, Ritchie considers a gift. How wonderful, the former life insurance salesman says, to save so many. How wonderful to sell them life. "You can't just sit there and watch them," says Ritchie, now 84, perched on his beloved green leather chair, from which he keeps a watchful eye on the cliff outside. "You gotta try and save them. It's pretty simple." 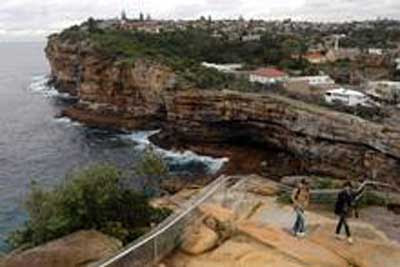 Since the 1800s, Australians have flocked to The Gap to end their lives, with little more than a 3-foot (1 metre) fence separating them from the edge. Local officials say around one person a week commits suicide there, and in January, the Woollahra Council applied for 2.1 million Australian dollars ($1.7 million) in federal funding to build a higher fence and overhaul security.

In the meantime, Ritchie keeps up his voluntary watch. The council recently named Ritchie and Moya, his wife of 58 years, 2010's Citizens of the Year. He's saved 160 people, according to the official tally, but that's only an estimate. Ritchie doesn't keep count. He just knows he's watched far more walk away from the edge than go over it.

Full story here.
Posted by arbroath at 8:05 am
Email ThisBlogThis!Share to TwitterShare to Facebook

I was there a few years ago and was surprised at how low the fence was, especially having been told about it being a favoured suicide spot. It's such a shame as it's actually a really beautiful location.

(mind you, it was my first trip to Oz and everything seemed beautiful so maybe I just had the rose-tinted specs on!)