A German man spooked by the sight of a Siberian tiger lying asleep in front of his car in the western German city of Aachen sprinted back to his house and called the police. It turned out to be an embarrassing morning for him.

"He had left his house and was walking up to his car when he saw this tiger. He took a step closer and was gripped by fear so he rushed back indoors and called the police," Paul Kemen, spokesman for the police in the city of Aachen, said. "He said he was scared." 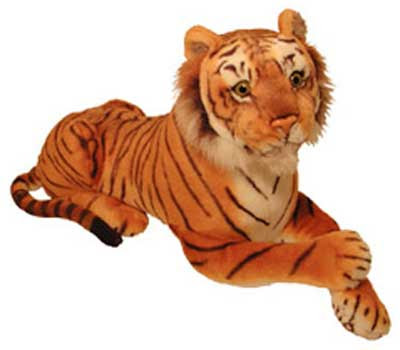 He also rang the Aachen Zoo but couldn't reach anyone because it was too early in the morning. When two police cars arrived at the scene, the 48-year-old man gave the officers directions by calling to them from the safety of his house, even though he was beginning to have his doubts about the animal because it hadn't moved a muscle since he spotted it.

"The officers approached the animal gingerly but then took heart and strode up to it. It was a high-quality stuffed toy, very real-looking, and didn't pose any threat," said Kemen. "There was laughter." The tiger spotter didn't seem to find the incident quite so amusing. "He refused to give any interviews to the press and believe me, I could have arranged plenty for him," said Kemen.
Posted by arbroath at 8:17 am
Email ThisBlogThis!Share to TwitterShare to Facebook

Better safe than sorry, I say. It's much nicer to laugh at a silly mistake than to cry over a death at the claws of a real tiger.