Child victims of the fallout from the Chernobyl disaster are being denied charity holidays in Britain by immigration officials. Children looking forward to a month's recuperation away from nuclear contamination are having their holiday plans ruined by the UK Border Agency (UKBA), which denies them visas, often just the night before they are due to travel. Since the disaster in 1986, British charities have helped thousands of young people from affected areas in the Ukraine and Belarus to have holidays with British families. Now those charities say their work is becoming impossible as the UKBA rejects so many visas at the last minute.

Last month only seven of 17 children due to holiday on the Isle of Wight actually made it on trips organised by Chernobyl Children's Life Line (CCLL), a charity which has brought over 46,000 children from the radioactive zone since 1991. The other 10 were told the night before departure that their holiday was cancelled. Another UK charity, Medicine and Chernobyl, has also had at least eight visas rejected this year. Vladislav Shpachuk, 10, who lives just 110km from the site of Chernobyl, was one of those told his holiday was cancelled. He suffers constant headaches and his family cannot afford to take their doctor's advice of spending a month a year out of the contaminated zone. His mother, Svitlana Shpachuk, said that the night before he was due to leave, "he was there, sitting on his suitcase. He told us he would wait until the early morning for the minibus to collect him to the airport. Then we got the phone call to say his visa hadn't come through. We were terrified of how to tell him, and when we did, he was crying and asking 'why me?'" 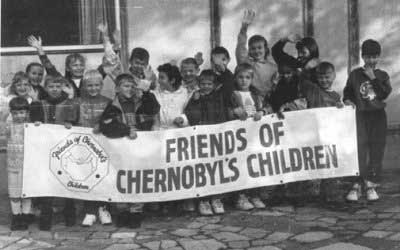 The border agency says its tougher measures are driven by child safety. But British host families whose prospective visitors have been refused visas include a headmaster and former foster parents; all of whom have full Criminal Records Bureau (CRB) checks. They are also vetted by the charity concerned. In one case, two children were due to visit the same family and only one child's visa was rejected, further calling into question UKBA's explanation. Children in parts of Belarus and the Ukraine continue to be at greater risk of terminal illnesses because of the contaminated environment they are exposed to. A month in Britain, where they can eat cleaner food, breathe cleaner air and build up strength, can greatly improve life expectancy.

British host families said this weekend that they have been subjected to "very unconventional" screening by UKBA officials. Some have been called in the early hours of the morning by border agency officials in Moscow, Kiev and Minsk, asking them to spell from memory the names of the children due to visit them, and asking whether they will be fed properly. In some cases parents say they were never contacted and visas were simply denied, though the UKBA claims "reasonable enquiries" were made. Paul Smith, chairman of CCLL's Isle of Wight branch and a social worker, said the border agency's measures offered no protection to children. "They have direct access to CRB files and these phone calls won't achieve anything. These families are unsung heroes who work for nothing to give these kids a chance. Damian Green and his UK Border Agency are against the human spirit."
Posted by arbroath at 8:01 am
Email ThisBlogThis!Share to TwitterShare to Facebook

But it doesn't say why they won't let them in the UK?

I struggle to find the reason behind this.

Send 'em to Canada.  We have similar programs, and I'm sure we'd be happy to have them.