Meet Mumble - the chicken that thinks he's a penguin. Farmer Lu Xi said that he got the confused bird as a chick - but instead of scratching in the ground and flying up to a perch to roost at night - Mumble walks around the coop just like a penguin waddling from side to side.

Lu said: "He only has little wings as well just like a penguin which he sticks out when he walks. I guess that's why he never flies." 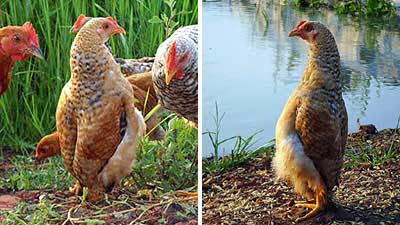 Local media at Jiangsu, the province in eastern China where the bird lives, nicknamed the confused chicken Mumble after the main character in the animated classic Happy Feet, about a penguin that can't sing so dances instead. Lu added: "I had not seen the film but I like the name, although my bird can't dance - and I don't think he can swim either.

But he should be happy - my family all like him and so we decided to keep him instead of putting him in the pot."
Posted by arbroath at 8:07 am
Email ThisBlogThis!Share to TwitterShare to Facebook