The largest wild goldfish ever caught in the UK has been landed at the broad at the University of East Anglia. To his shock, Lowestoft angler Stuart Thurston, 27, landed the bright gold, 7lb 5oz fish while fishing for carp. He had been fishing for several hours and had caught a handful of carp before hooking the unusual fish.

“To my surprise I lifted it out of the water and it was orange,” he said. “I'm surprised a pike hasn't had it for dinner.” He quickly grabbed a nearby fisherman to take a photograph then released the colourful specimen to be caught another day. There are two goldfish in the 18-acre lake which are well known among the 40 or so anglers that regularly fish it. 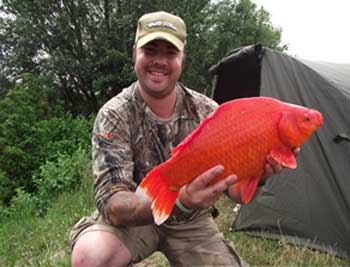 It is thought that they were pets discarded by their owners, but their origins are likely to remain a mystery. The same goldfish was last caught in 2007 by Graham Northwood - but then it weighed just 5lb 5oz. Since then it has put on weight and become a record-breaker.

The catch has to be officially verified before it becomes an official British record, but it is already being widely hailed as the largest goldfish ever caught in the UK. It has beaten the 5lb fish caught in Poole by a 16-year-old schoolboy in July. For Mr Thurston it is a strange but welcome record. “I'd rather it was a record-breaking carp but I'm not going to whinge,” he said.
Posted by arbroath at 8:00 am
Email ThisBlogThis!Share to TwitterShare to Facebook