Running with scissors is a known hazard, but a 15-year-old New Zealand girl learnt the hard way that it's also dangerous to run with a toothbrush. The girl was admitted to Auckland's Middlemore Hospital after accidently swallowing her 19cm (7.5 inch)toothbrush.

She had been running up steps with the toothbrush in her mouth when she tripped and fell, pushing most of the brush into her oesophagus. "Part of the toothbrush was still in the mouth but with apparently a very strong gag reflex she swallowed this down before it could be pulled out," gastroenterologist Dinesh Lal said. 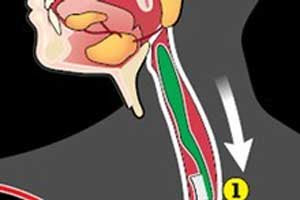 The girl told doctors she felt fine, but could feel the brush "churning around" in her stomach. The toothbrush was extracted from her mouth using a medical snare.

Dr Lal said the girl suffered no internal damage and was sent home a few hours later. "In summary, walking or running around with a toothbrush in the mouth is potentially dangerous," he said.
Posted by arbroath at 8:10 am
Email ThisBlogThis!Share to TwitterShare to Facebook