A Swedish motorist is facing the world's biggest ever speeding fine of £650,000 after being caught driving at 180mph on a Swiss motorway. The 37-year-old Swedish man was driving at two and a half times the speed limit in his £140,000 Mercedes.

In Switzerland speeding fines are worked out using a formula based on the income of the motorists and the severity of the speed. According to prosecutors he is now facing the highest possible penalty of 300 days of fines at £2,166 a day – a total of £650,000. "We have no record of anyone being caught travelling faster in the country," said a police spokesman. 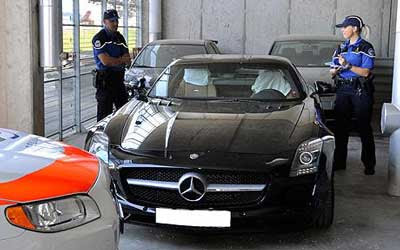 He was caught by a speed camera on the A12 highway between Bern and Lausanne on Friday. He escaped being zapped by numerous radars en-route simply because he was going too fast and they were incapable of clocking speeds beyond 200kph (125mph). It was a new generation of radar machines that finally caught him travelling at close to 300kph (186mph).

"I think the speedo on the car, which is new, is faulty," he told police by way of an explanation. The police arrested him shortly afterward and released him after questioning. Benoît Dumas, a police officer in the region where the six-litre Mercedes SLS was stopped, said: "He needed over half-a-kilometre of road to come to a halt."
Posted by arbroath at 8:04 am
Email ThisBlogThis!Share to TwitterShare to Facebook