Former British Prime minister and unconvicted war criminal, the Reverend Tony, has decided to donate the profits from his memoirs to a sports centre for injured soldiers. 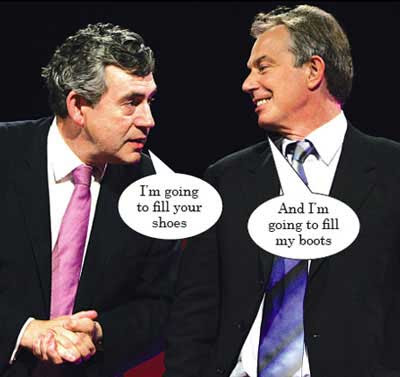 As someone who has earned squillions from spouting his righteous bullshit to gullible audiences around the world since gracefully handing over office to Gordon McBroon doing a runner, surely this isn't a pang of guilt?

A spokesman said Mr Blair would hand over the reported £4.6m advance payment plus all royalties to honour "their courage and sacrifice". The Royal British Legion will receive the money after the book, called A Journey, is published next month.

Here you can see and hear the whole Reverend Tony spin. Sadly, YouTube user tonyblairoffice, aka The Office of Tony Blair, have disabled comments. I can't think why.
Posted by arbroath at 8:00 am
Email ThisBlogThis!Share to TwitterShare to Facebook