The princess birthday cake for a 3-year-old girl was one of the few things left untouched after a brawl that police said involved 75 people at a hall in suburban Cincinnati, Ohio. Some 150 people were at a party at the Fraternal Order of Eagles Hall in Elmwood Place when the fight started early on Tuesday. Seven police jurisdictions were called in to quell the fighting. "When (first responding) officers arrived there, it was a pretty intense fight going on inside," Elmwood Place Police Chief William Peskin said. "They actually had to wait until they got backup there in order to make entry because there were so many people throwing bottles and chairs, so they had to actually wait." 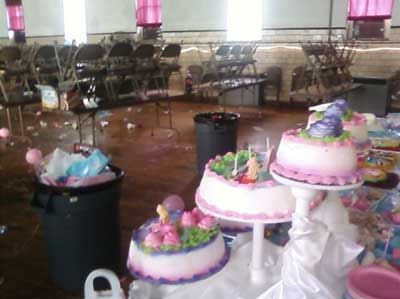 Police said the hall was being rented out and the fraternal organization's membership was not involved. "We got caught up in a family feud," Eagles member David Frost said on Tuesday night, referring to the group that rented the Eagles' hall for the party. "We're embarrassed by this." Members cleaned up the shards of glass and damaged chairs and a table on Tuesday, said Frost, adding that his organization may revisit its policies on rentals.

The party organizers brought their own alcohol, he said. "I hate to see anybody get hurt," Frost added. The fight apparently broke out between the birthday girl's father and her mother's boyfriend, police said. Police charged the girl's 26-year-old father with disorderly conduct. Four others possibly face charges in the fracas.

Fifteen people were injured in the melee, with at least five hospitalized, including one person who required surgery to the eye due to a cut from a beer bottle, police said. Police said beer bottles were the primary weapons used in the bloody melee. One person in the back threw as many bottles as he could find, Peskin said. A total of 20 officers responded to the scene, where nearly 30 children were in attendance.

There's a longer news video here.
Posted by arbroath at 8:08 am
Email ThisBlogThis!Share to TwitterShare to Facebook