Administrators at Byron Nelson High School in Trophy Club, Texas, suspended a 16-year-old boy on Tuesday because his eyes were bloodshot and they thought he might have been smoking marijuana. The teen said he was not high. Instead his eyes were red because he had been grieving the loss of his murdered father. Kyler Robertson’s father was stabbed to death on Sunday. His mother honoured his wishes and let him go to school on Tuesday to be with his friends.

“I am sure he had a lot on his mind going to school. I had asked him not to go to school,” said Cristy Fritz. Before returning to class Kyler had to go to the office to get a tardy slip. That’s when school employees accused him of being high because he had red and watery eyes. Fritz said she got a call from administrators who told her Kyler would be suspended for three days. 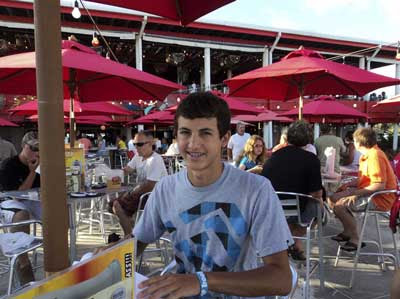 “I was pleading with her to understand the severity of the situation, his emotional well being. How could they do this to him at this time? What are the alternatives?” she said. District spokeswoman Lesley Weaver would not discuss the case, but said when administrators suspect a student is under the influence, a school nurse will observe symptoms like their behaviour, odour and their eyes. The district does not actually test students, though. That’s left to the parents.

Fritz said she was told by the assistant principal that she could have Kyler tested for drugs within two hours and if it was negative he could return to school. She did just that. Kyler was allowed to return to class after he showed school administrators a copy of his negative test results. The teen’s mother still wants an apology from administrators and she wants the district to remove the suspension from his permanent record. She is in the process of appealling it. “We had other things to do this week than worry about a three day window for an appeal, a two hour window for a drug test and my son’s reputation and high school career,” she said.

With news video.
Posted by arbroath at 8:10 am
Email ThisBlogThis!Share to TwitterShare to Facebook