The day a four-legged chicken hatched, her owner was travelling through Australia's top alien hotspot. Kevin Horner said it may have just been a coincidence the chicken with two extra legs was born as he was passing through Wycliffe Well, 1100km south of Darwin, last Wednesday. He has dubbed the chirpy little hy-line brown chicken "Drumstick" on account of her unexplained extra limbs. 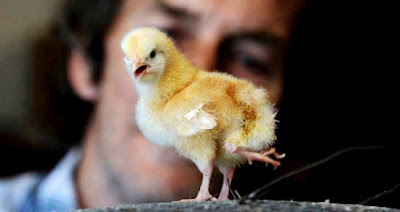 "I have never seen or heard of a four-legged chicken," he said. "I've bred about 100,000 chickens over the years. I've never seen anything like this. The first thing I saw was it sitting in there and thought it was sitting on a dead chicken.

"I just saw these other extra little feet. I think it formed from a double yolk egg, I don't think it's all that uncommon, but I've never seen it before." Mr Horner, 59, of Noonamah said not everyone believed him when he first revealed his bizarre new pet.

"I said it to my wife and she said, 'what have you been drinking'," he said. "I told a few people down at the pub about her and they said I must have done some good drugs." Drumstick is reportedly not facing any segregation from the other chickens. And the chicken will be spared from becoming a meal and will instead be a prized pet.
Posted by arbroath at 8:12 am
Email ThisBlogThis!Share to TwitterShare to Facebook