A former manager of a McDonald’s franchise in Porto Allegre, Brazil, sued the hamburger chain for making him gain 65 pounds while he worked with them for over a dozen years. McDonald’s must pay him $17,500 as recompense for his weight gain, a Brazilian court ruled on Tuesday. The 32-year-old man, whose identity wasn’t disclosed, complained that the company's policy of mandatory food sampling caused him to balloon from about 155 lbs. to 231 lbs. while working at their restaurant in southern Brazil.

The man said that he felt forced to taste everything on the menu to ensure the quality of the food because McDonald's hired undercover customers to randomly visit restaurants and report back on quality. Also, he blamed the free lunches consisting of burgers, fries and ice cream, which contributed to his excessive weight gain during the course of employment. 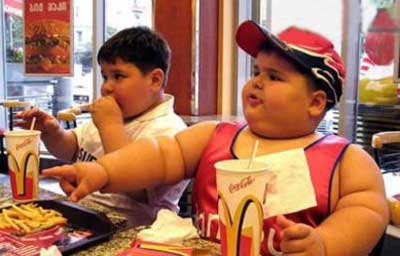 Judge Joao Filho agreed with the man, and issued a ruling against the company, ordering them to pay $17,500 to the ex-employee. "We're disappointed with this preliminary court ruling, as it's not an accurate representation of our highly regarded work environment and culture." said a McDonald’s spokesman.

McDonald’s countered the manager’s claims, noting that several healthy options are available for the employees. “The chain offers a large variety of options and balanced menus to cater (to) the daily dietary needs of its employees,” it said. “We're disappointed with this preliminary court ruling, as it's not an accurate representation of our highly regarded work environment and culture,” McDonald's said in a statement. “This case is still a pending legal matter and it would be premature to draw conclusions at this time.”
Posted by arbroath at 8:06 am
Email ThisBlogThis!Share to TwitterShare to Facebook