Man, 82, grows new tooth after having none for over 50 years

All pensioner John Giblin wants for Christmas is to get rid of his new front tooth. After more than 50 years without any teeth the 82-year-old was amazed when he discovered he had grown a new one at the front of his mouth. Retired postman Mr Giblin moved from London to Sommerville Close in Faversham two years ago for a quieter life. After eating too many sweets, all his teeth fell out in his 20s and he was fitted with dentures.

But a new tooth was lying in wait, and several months ago it decided to put in an appearance. "My dentures became incredibly uncomfortable, and started to cause me quite a bit of pain," said the poetry enthusiast. "Then I felt my gum and discovered something sharp. At first I thought it was a bit of my jaw bone poking through, never did I imagine it would be a new tooth." 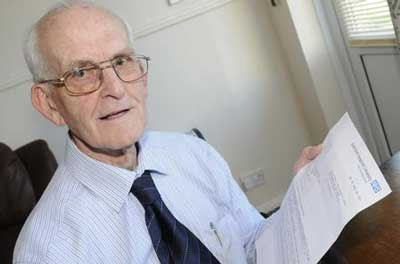 A visit to the dentist and an X-ray later Mr Giblin was told he was the proud owner of a new incisor but is now due to have it removed. He said: "I'm still waiting for the damn thing to be taken out. It is all a bit embarrassing, especially as it is in the dead centre front of my mouth. I've never heard of anything like this before, I didn't even know it was possible.

"When I lost my teeth all that time ago, I certainly didn't think I would be growing a new one 50 years later. My family have joked that I'm going through my second childhood. The whole situation is extraordinary and the sooner it is removed the better. When I look in the mirror it is just there staring at me. If it isn't taken out soon I'll knock it out myself."
Posted by arbroath at 8:00 am
Email ThisBlogThis!Share to TwitterShare to Facebook