Two monkeys have been appointed to the unlikely position of station masters of a Japanese railway station. Nehime and Rakan, two baby monkeys, have started "working" at Hojo-cho station in Hyoto prefecture in a bid to attract more visitors to the line. 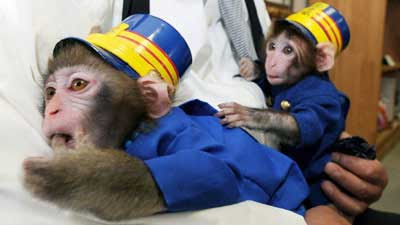 The monkeys, aged seven months and three months, were dressed in blue uniforms made from traditional local fabrics complete with mini hats before being formally appointed station masters and "special city residents" by the local mayor.

The pair will now go on duty at the station located on the Hojo-cho line, which currently operates Japan's first biodiesel fuel train.

The monkeys belong to a local resident who proposed the unusual arrangement in order to help revive the fortunes of the financially troubled railway linenewspaper.
Posted by arbroath at 8:13 am
Email ThisBlogThis!Share to TwitterShare to Facebook