The Russian military has come up with an inventive way to deceive the enemy and save money at the same time: inflatable weapons. They look just like real ones: they are easy to transport and quick to deploy. You name it, the Russian army is blowing it up: from pretend tanks to entire radar stations. The decoys are a hundred times cheaper than the real thing, which means Moscow will save a lot of money by blowing up its own weapons.

On the edge of Moscow, two men carry a black duffle bag into a field, then drop it on the ground. When they open the bag, they take out a large sheet of plastic. It looks like a tent or a tarpaulin. In fact, it's the Russian army's latest strategic weapon. It doesn't need ammunition - just air. On goes the pump, in goes the air and the plastic sheet begins to rise and take shape. 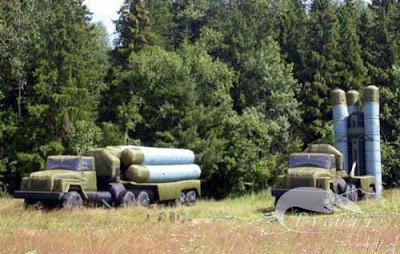 A turret appears, then out pops a long plastic gun barrel. This is an inflatable Russian tank. When the men pump up their next piece of plastic, this one expands into a S-300 rocket launcher, complete with giant truck and inflatable rockets. It is a cross between a ballistic missile and a bouncy castle. And waiting to be blown up are inflatable MiG fighter jets - even entire Russian radar stations.

These state-of-the-art stand-ins are among the most advanced military decoys in the world. What they lack in firepower, they make up for in flexibility: they are light and can be deployed quickly to deceive the enemy. They are also very realistic. They are made of a special material that tricks enemy radar and thermal imaging into thinking they are real weapons.

Video. There's a large gallery of photos here.
Posted by arbroath at 8:11 am
Email ThisBlogThis!Share to TwitterShare to Facebook