A pig which can walk on two legs has become a local celebrity in China. The 10-month-old porker is known by villagers as "Zhu Jianqiang" (Strong-willed Pig) after it was born with only two front legs and learned to balance on them well enough to walk. According to its owner, Wang Xihai, it was one of nine piglets born in a litter this January. 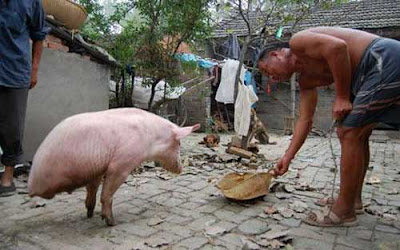 He said: "My wife asked me to dump it but I refused as it's a life. I thought I should give it a chance to survive and unexpectedly it survived healthy." Several days after its birth Wang decided to train the two-legged piglet to walk by lifting it up by its tail.

He said: "I trained her for a while each day. After 30 days she can now walk upside down quite well." Wang said since the birth of the pig, which currently weighs 50kg (110lbs), his home has been besieged by visitors. 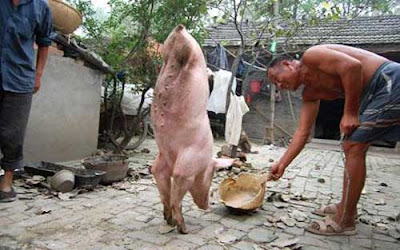 A circus even offered to buy for the pig for a large sum but Wang refused to sell. He said "She proved to us that no matter what form life is it should continue to live on. I won't sell it no matter how much the offer is."

Here there's video of another two-legged pig, born in The Philippines last year.
Posted by arbroath at 8:09 am
Email ThisBlogThis!Share to TwitterShare to Facebook

Someone reposted this on http://cellar.org/showthread.php?t=23663 where i saw it an reposted that link a tweet via Twitter.

Sorry you didn't get the credit, I just noticed they did show the link to your original page but it was so small and tucked away down on the bottom of the page i missed it. In case you care about getting credit and all...