An orphaned koala which was shot up to 15 times in a cruel attack is fighting for its after being found next to its dead mother. The tiny joey recieved a fractured skull, gunshot pellets scattered throughout the body and damaged stomach and intestines in the attack which has shocked animal rescuers. Vets say it is not clear yet whether the joey, which was blasted out of a tree with a shotgun on Queensland's Sunshine Coast hinterland, will survive.

The joey was found at Jimna on Friday next to its mother, which had died from gunshot wounds. Stomach and intestinal perforations have been repaired and three pellets removed, including from the skull, but a further 12 remain. Veterinarian Amber Gillett said yesterday the joey - who staff named Frodo - remained in a critical condition. If her condition can be stabilised, she will undergo further surgery to remove pellets and repair damage. 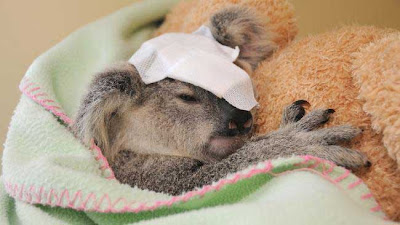 She is receiving intravenous antibiotics, fluids and pain relief and has had blood transfusions. "Frodo's condition is extremely critical and will require intensive monitoring and care in the coming days," Dr Gillett said. "We are stunned to see this kind of animal cruelty and cannot begin to fathom why somebody would want to shoot a koala that poses no threat to them."

RSPCA chief executive Mark Townend said his organisation would provide any help needed to find the culprit and would be happy to prosecute. "If people think they can help, contact us, the police or the Environment Department," Mr Townend said. "I just can't believe the ratbags we've had to deal with over the past 12 months. We've spent a lot of money on education about animal welfare. If people don't like animals, why don't they just leave them alone. They don't have to shoot them."
Posted by arbroath at 8:08 am
Email ThisBlogThis!Share to TwitterShare to Facebook