Animal mad Alan and Heather Hewitt share their home with an amazing menagerie of 80 exotic creatures. Rooms in the detached house are packed with 20 snakes, 15 reptiles, 25 mammals - plus assorted birds and invertebrates. 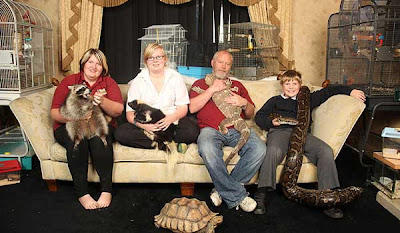 They also find room for children, Abigail, 17, Grace, 15, and Edward, ten, in Morley, near Leeds. Alan, 44, said: "Living with 80 animals is a tremendous experience. "Many end up here due to neglect and people not knowing how to look after them. Or they've outgrown the owner, who becomes frightened. 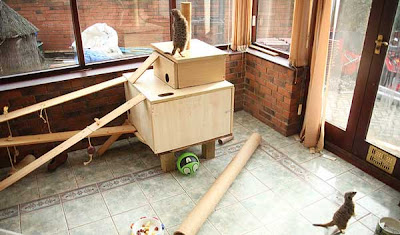 "We get animals from the police, RSPCA and the public. We have to separate prey and predator. And I'm always on my guard. I'm forever being bitten by tarantulas and snakes or stung by scorpions." The £20,000-a-year cost of the Morley Exotic Animal Rescue is met by fundraising and they are applying for charitable status.

With news video.
Posted by arbroath at 8:02 am
Email ThisBlogThis!Share to TwitterShare to Facebook