Children will be given shopping vouchers for walking to school

Children will be given shopping vouchers for walking to school under a radical Government plan to combat obesity. Under the scheme, which will be part of a public health white paper to be announced on Tuesday, children will receive Topshop vouchers and cinema tickets for travelling to school on foot.

Every school in the country will be offered access to technology which would allow children to use swipe cards to track their journeys, so that points can be swapped for consumer rewards. Under a pilot scheme under way in Wimbledon, south London, teenage girls receive a £5 Topshop voucher if they walk to school eight times, and an Odeon cinema ticket for five journeys, in a certain period. 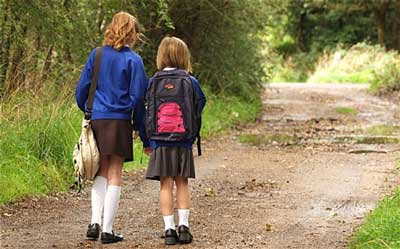 The controversial initiative is one of several schemes endorsed in a strategy which will urge councils and businesses to find more "creative" ways to improve the nation's health. Ministers say their approach is a departure from Labour's "nanny state" tactics which attempted to lecture people into changing their ways.

Instead, attempts to improve Britain's health will be based on a "nudge" theory, devised by two US economists, who say incentives and peer pressure are the best ways to prompt people out of bad habits. Since the Coalition was formed, the Cabinet Office has set up a "behavioural insight team" – dubbed "the Nudge team".
Posted by arbroath at 8:00 am
Email ThisBlogThis!Share to TwitterShare to Facebook